Ruta Lee, who appeared in the small role of Diana in Witness for the Prosecution (1957) spoke about her appearance in the film during the TCM Cruise.  Ms. Lee got the part when Arthur Hornblow, Jr. saw her at a Frank Sinatra night club appearance.  Hornblow approached her, and asked her to do a screen test; after which Marlene Dietrich (Christine Vole) insisted that her hair color be changed (so Ms. Lee became a brunette for the film).

Sir Wilfrid Robarts (Charles Laughton) has just returned home from hospital, with his nurse Miss Plimsoll (Elsa Lanchester) in tow, when he is approached by solicitor Mayhew (Henry Daniell) to possibly take on the defense of Leonard Vole (Tyrone Power) who is about to be arrested for the murder of Emily Jane French (Norma Varden), a wealthy widow who Vole had befriended.  Sir Wilfred finally agrees to take on the case (over the objections of Miss Plimsoll), as he is convinced of Vole's innocence, and the barrister he intended to recommend is not (John Williams as Brogan-Moore).  Complications ensue in the form of Vole's wife, Christine.  Is she really trying to help her husband, or is she using the murder as a means of getting rid of him for good?

I've seen this film dozens of times on television; I always appreciated the humor that floats through this very serious story.  But, seeing it with an audience really impressed upon me how FUNNY it really is - especially the interplay between Charles Laughton and (his wife in real life) Elsa Lanchester, who acts as straight woman for his bon mots.  For example, when Miss Plimsoll checks Sir Wilfred's thermos (to verify no brandy is present), he counters her with "If you were a woman, Miss Plimsoll, I would strike you."  And when she informs him that she was engaged to a lawyer but he died, he responds, "He certainly was a lucky lawyer." But the humor would not work if the audience didn't sense the affection between Laughton and Lanchester, and they easily give you the sense (even before the ending of the film) that these two are now a team. 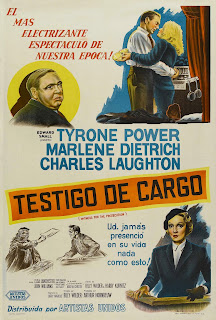 Based on a short story by Agatha Christie, Witness for the Prosecution was adapted by Ms. Christie as a play which opened on the West End (London) in 1953. David Horne starred as Sir Wilfred and Derek Blomfield appeared as Leonard Vole.  When the play moved to Broadway, Francis L. Sullivan took on the role of Sir Wilfred, with Gene Lyons as Vole.  The character of Miss Plimsoll does not exist in the stage version.

Only one member of the Broadway cast reprised her role in the film - Una O'Connor as Janet McKenzie, housekeeper to the murder victim.  Born in Ireland in 1880, Ms. O'Connor started her career on the stage, in both Ireland and England.  In 1911, she appeared in her first Broadway play (The Playboy of the Western World), and by 1929, she was appearing in films, first in the UK and then in Hollywood.  She's perhaps best remembered as Maid Marian's lady-in-waiting, Bess in The Adventures of Robin Hood, and as Reginald Gardiner's housekeeper in Christmas in Connecticut.    But, even while doing films, she still managed to squeeze in the theatre - she appeared in 11 Broadway plays and 64 films, and ventured into television in the 1950s.  She was 77 when she appeared in this film, and when it wrapped, she retired.  She died two years later.

This was also Tyrone Power's final film appearance. According to these TCM articles, Power was not the first choice for Leonard Vole - William Holden was.  Also considered were Gene Kelly, Kirk Douglas, Glenn Ford, Jack Lemmon, and Roger Moore.  Power, who had at first turned down the role, finally accepted; with this role came the part of Solomon in Solomon and Sheba, which Power started shooting on September 15th, 1958.  But on November 15th, after shooting a dueling sequence, Power complained of arm and chest pain.  Despite being rushed to the hospital, he died of a massive heart attack. 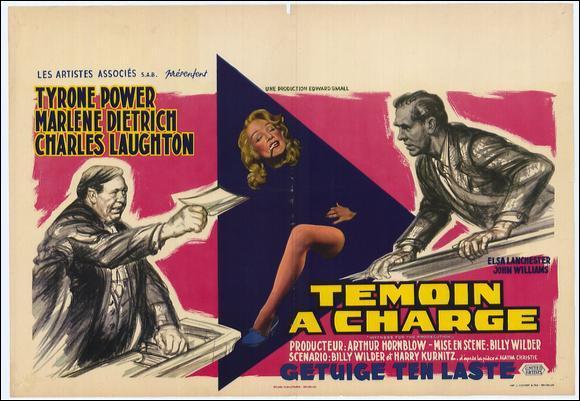 Ava Gardner and Rita Hayworth were also considered for the role of Christine, and while Gardner very much wanted to do it, Billy Wilder wanted his friend Marlene Dietrich in the lead.  Without giving anything away (in case you've not seen it), it has often been said that Dietrich lost out on an Oscar nomination because of the secrecy about the film's ending.

Finally, there is Charles Laughton.  Laughton was nominated for an Oscar for this role, but lost to Alec Guinness in The Bridge on the River Kwai.  Certainly, a notable performance, but my vote goes to Laughton.  A consummate actor, an impressive director (he directed once - the magnificent Night of the Hunter, and Robert Mitchum once claimed Laughton was his favorite director), Laughton won the Oscar once - for his role in The Private Life of Henry VIII (1934), and was nominated twice more - for this and for The Mutiny on the Bounty.  His performance here is layered and substantial.  He's funny, he's businesslike, he's subtle, he's passionate. All in all, his performance is special.

These  notes from the AFI catalog go into some detail about the changes to the script, including, interestingly, the film's end.  The film got excellent reviews, as is evidenced by this New York Times review, and the AFI named it #6 in its list of Top 10 Courtroom Dramas.  All in all, this is an excellent film, only enhanced by being able to learn some of its history firsthand.

We'll close with this scene, in which Christine Vole is interviewed by Sir Wilfred: two actors at the top of their game.  Unlike her husband in an earlier scene, Christine takes no nonsense in her examination:


This posting is part of the Oscar Snubs Blogathon.