Golden Boy and the Blacklist 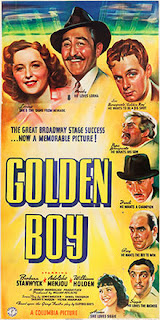 Tom Moody (Adolphe Menjou), a fight promoter, is eager to make enough money to buy off his estranged wife and finally marry his mistress, Lorna Moon (Barbara Stanwyck). When Joe Bonaparte (William Holden) enters their lives, they think they have found their Golden Boy (1939), but there are problems. Besides being a talented fighter, Joe is a gifted violinist, and his father (Lee J. Cobb) strongly objects to Joe relinquishing his potential career as a musician for a life in the boxing ring - the the potential destruction of his hands.

Perhaps it seems unusual to look at a 1939 film as part of the Banned and Blacklisted Blogathon, but this film featured a great deal of talent that was, in one way or another, affected by the House UnAmerican Activities Committee (HUAC).  We'll take this opportunity to look at both the film, and the experiences of those involved in it during the period of the blacklist, in this year, the 70th anniversary of the beginning of this evil campaign.

My interest in the Blacklist really began in 1972, when Robert Vaughn (yes, THAT Robert Vaughn, the actor who appeared in The Man from U.N.C.L.E., and had a PhD in Communications from University of Southern California) published Only Victims: A Study of Show Business Blacklisting.  The book demonstrated that everyone involved in the process in Hollywood was victim - from those who supported the blacklist, to the actual victims. Dr. Vaughn's title was  taken from a quote by Dalton Trumbo: "it will do no good to search for villains or heroes or saints or devils because there were none; there were only victims." 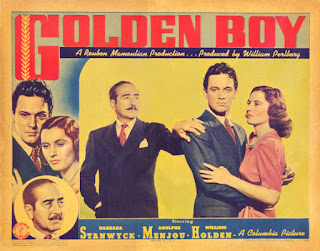 Barbara Stanwyck is, as always, excellent as Lorna Moon (interestingly, the play was purchased as a vehicle for Jean Arthur, with Frank Capra directing! (TCM article)). Ms. Stanwyck can take a scene, as she does when she is trying to convince Joe to continue fighting, and change her reaction on a dime.  Though filmed under the code, Lorna remains unpunished, despite the fact that she is clearly having an affair with the married Tom.

Ms. Stanwyck was a staunch conservative - she objected to labor unions and only joined the Screen Actors' Guild when it became apparent that the new union would prevent her from working (A Life of Barbara Stanwyck: Steel-True, 1907-1940). When the investigations of HUAC began, Stanwyck, like her husband Robert Taylor, became a member of the Motion Picture Alliance for the Preservation of American Ideals. Whether she herself named names is information that is not recorded - Mr. Taylor certainly made a name for himself when he testified before HUAC on October 22nd, 1947, and named names (Howard Da Silva and Karen Morley, specifically). But Ms. Stanwyck was involved with a group that was busily hunting for Communists within the Hollywood rank-and-file.

So too was Adolphe Menjou a member of the Motion Picture Alliance for the Preservation of American Ideals. His Tom Moody in our film is a rather banal man; it's hard to understand why Lorna would be interested in him, so it is easy to root for a relationship between Lorna and Joe. The day before Robert Taylor testified in front of the HUAC, Mr. Menjou testified. He fancied himself an expert on Communism, having read "over 150 books on the subject [of Russia]". He then accused John Cromwell of "acting an awful lot like a communist" (while acknowledging that he had no knowledge that Mr. Cromwell actually was a communist. He considered himself "a witch-hunter if the witches are Communists. . .a Red-baiter. I make no bones about it whatsoever. I would like to see them all back in Russia." Later, he would publicly attack many Hollywood liberals, including Katharine Heburn ("scratch a do-gooder, like Heburn, and they'll yell 'Pravda'."), infuriating Spencer Tracy and Ms. Hepburn who would only speak to Mr. Menjou onscreen when they filmed The State of the Union in 1948. (Katharine Hepburn: A Remarkable Woman by Anne Edwards) 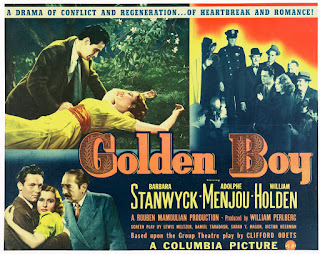 William Holden is quite wonderful as Joe, a part for which John Garfield, Tyrone Power and Richard Carlson were all considered (AFI catalog).  This was his first real picture, and he almost got ousted from the film - only thanks to Barbara Stanwyck's intervention and coaching did he remain in the role that would effectively begin his career. When we discussed their only other film together, Executive Suite, we provided a clip of Ms. Stanwyck's tribute to Mr. Holden at the 1977 Oscars.  Though a participant in Hollywood Fights Back, a radio program hosted by the Committee on the First Amendment (the group protesting HUAC's activities), (J. Edgar Hoover Goes to the Movies: The FBI and the Origins of Hollywood's Cold War by John Sbardellati) Mr. Holden, unlike many of the other committee members (Marsha Hunt and Jane Wyatt among them) seems to have escaped unscathed from the morass of the blacklist. He even rejected vehement anti-Communist Hedda Hopper's advice when he appeared in The Bridge on the River Kwai, co-scripted by HUAC refugee Carl Foreman (Hedda Hopper’s Hollywood: Celebrity Gossip and American Conservatism by Jennifer Frost). Again, it did not affect his career.

Others in the cast were not as lucky. Lee J. Cobb (named by Larry Parks, himself a victim of the blacklist), and writer Clifford Odets (named by Leila Rogers, Ginger's mother) were blacklisted until they finally, in desperation, went before HUAC to name names (see this Study Guide from Lincoln Center, from a production of the play there). For more information on those affected by HUAC, visit this list. 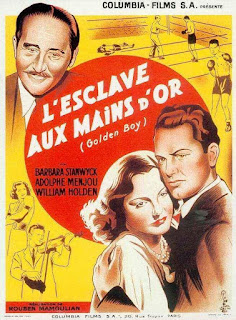 Golden Boy had started as a Broadway play in 1937; many of those involved in that play were also targeted, including Mr. Cobb, Mr. Da Silva, Frances Farmer, Elia Kazan (who would become a symbol of the traitor when he named names to clear himself), Morris Carnovsky (named by Mr. Kazan) , Phoebe Brand (Mr. Carnovsky's wife; also named by Mr. Kazan), Luther Adler, and Roman Bohnen.  Jules Garfield, who would take Hollywood by storm under the name John Garfield was also in the Broadway play. He dearly wanted to play Joe Bonaparte, but was unable to get the needed studio loan-out to play Joe. Mr. Garfield, too, was targeted by HUAC, probably causing the heart attack that claimed his life at age 39.

These individuals, colleagues in 1939, would become adversaries for no real reason; yet the hatred that the Blacklist generated still remains.  In 2008, when Elia Kazan received a special Oscar, many in Hollywood either boycotted the award, or refused to applaud. (You can see the ceremony here). Was Mr. Kazan the only person who surrendered to HUAC? Are people like Lee J. Cobb and Clifford Odets evil because they caved into the pressure of not working in their chosen profession? And are we going to continue to punish the victims - because of their political beliefs, their race, creed, gender or sexual identity? That we can talk about the Blacklist in 2017 is a step in the right direction - let's keep the dialogue going, and remember it as a symbol of all the bias in our world.

We'll leave you of this scene featuring Ms. Stanwyck and Mr. Holden: 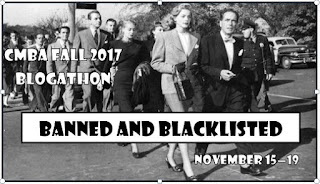