Robert is in the Park

After a glorious six-day honeymoon in the Plaza Hotel, newlyweds Paul (Robert Redford) and Corie Bratter (Jane Fonda) settle down to married life in a fifth-floor walk-up apartment in New York City's Washington Square.  Dealing with the vagaries of life in the City (that we love!), Corie and Paul face broken windows, a bedroom that is actually a closet, plumbing that works backwards, a bathroom without a bathtub, and an upstairs neighbor who uses their bedroom window to get into his attic apartment.  Let's all go Barefoot in the Park (1967).

This was not the first time we'd seen this movie, though most had seen it many years ago. From my perspective, this has always been a movie I enjoyed. However, watching it with a more critical eye brought to all our attentions many issues with the film that we found, at the very least, to be annoying. Most of our irritation focused on Corie Bratter.

Corie is, by and large, a nitwit. She's gone from her mother's home to her husband's home. We've no indication that she has ever worked or even gone to college. We know her mother, Ethel Banks (Mildred Natwick) is a financially secure widow, living in New Jersey. Mrs. Banks has the money to send Corie costly - and frivolous - gifts from Bergdoff-Goodman (one of NYC's more expensive department stores). Corie has never wanted for anything. Nor it seems, has she ever been asked to use her brain. She sits around her new apartment all day; she's so bored that, at 5pm, she stands at the bus stop waiting for her husband to come home. And she has no concept of what is required to get ahead in the working world.  One wants to shake her periodically. 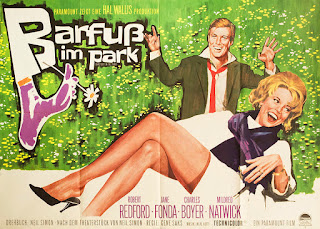 This is not Jane Fonda's fault - she is doing what the character was written to do.  If anyone is to blame for Corie, it is playwright Neil Simon, who really doesn't know much about women.  If you are familiar with his later film, The Goodbye Girl (1977), we have a similar ditzy woman. Paula McFadden could be seen as what could happen to Corie if Paul left her with a small child.  Mr. Simon writes about a woman whose only skill (and ambition in life) is to redecorate her apartment. At least Corie sticks to a budget.

The role on Broadway had been played by Elizabeth Ashley, and Ms. Fonda was by no means the first choice.  Among the many actresses considered were Geraldine Chaplin, Elizabeth Hartman, Susan Saint James, Faye Dunaway, Yvette Mimieux, Sandra Dee, Suzanne Pleshette, Samantha Eggar, and Marlo Thomas (AFI Catalog). Though she is the focus of the story, Corie is the weakest character in the film, when viewed with 21st Century eyes. 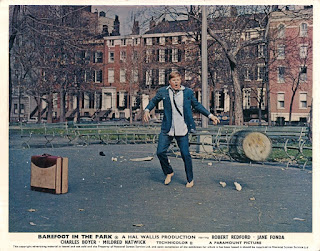 Robert Redford reprises his role from the Broadway play.  He had to think long and hard before he took on the film - he didn't particularly like Paul, feeling the character was too uptight (TCM article). However, we found Paul to be likeable. Sure, he's not really open to new foods and he gripes a bit too much about the six flights of stairs to his apartment (he counts the stoop!), but he is also a responsible grown up. He's trying to build a law career and support his wife, while she spends all her time trying to get him to play, discouraging him from going to work, preventing him from preparing for a case, and keeping him out til 2am on a work night.  He is more sinned against than sinning.

By far, the most interesting and enjoyable characters in the story are Ethel Banks and Victor Velasco (Charles Boyer). Ms. Natwick was reprising her role from the play, and received an Oscar nomination as best supporting actress. She's wonderfully delightful as a middle-aged matron tossed into the maelstrom that her daughter and Victor Velasco create. Despite their chaos, she tries to become part of the festivities, even though everything that they suggest (a ride on the Staten Island Ferry in the dead of winter, food that must be "popped" rather than nibbled, a selection of unfamiliar alcoholic beverages) are way out of her comfort zone. You can't help but love Ethel. 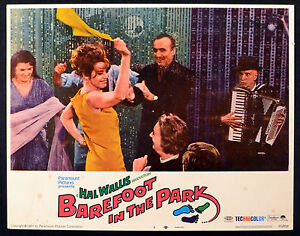 Charles Boyer serves as an excellent foil for Ms. Natwick. The older couple are very much like Corie and Paul - one irresponsible, and the other perhaps a tad too responsible.  Mr. Boyer brings a joie de vivre to the part to which the audience easily responds. Taking on the role that Kurt Kaszner had originated on stage, Mr. Boyer been working in films, both in America and in France, since the 1920s. His first English-language picture was 1931's The Magnificent Lie. He would become one of Hollywood's most popular leading men when he appeared with Marlene Dietrich in The Garden of Allah (1935). He worked on Broadway and on radio, had a career on television, working with partners Dick Powell and David Niven on Four Star Playhouse. He continued working in film and television well into the 1970s.  His only child died in 1965; following his wife's (of 44 years) death from cancer in 1978, Mr. Boyer committed suicide at the age of 78. 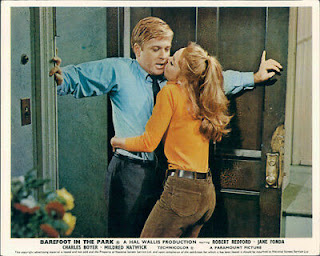 Another cast member from the play is Herbert Edelman (later billed as Herb Edelman - you may remember him as Bea Arthur's husband, Stan on The Golden Girls), playing Harry Pepper, the telephone man. New characters in the film include Mabel Anderson as Aunt Harriet (she has one scene) and Fritz Feld as the owner of the peculiar Albanian restaurant on Staten Island.

The story has been redone several times. Broadway saw a new production in 2006, with Jill Clayburgh as Ethel, Tony Roberts as Victor, and Amanda Peet as Corie. It was made into a 1970 TV series with Scoey and Tracy Reed as the Bratters. In1982, a TV movie (based on a stage play) was aired, starring Richard Thomas and Bess Armstrong as the newlyweds.

When the film opened at New York City's Radio City Music Hall, the New York Times review was not complimentary, calling it a "carelessly knocked-together film". While the story hasn't aged well, it is still worth seeing, if only to see Mildred Natwick and Charles Boyer working together. We'll leave you with a trailer from the movie.