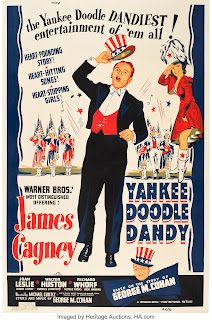 From the stage of I’d Rather Be Right, George M. Cohan (James Cagney), famed actor and the composer/lyricist of Yankee Doodle Dandy (1942), is summoned to Washington DC to meet President Roosevelt. At the President’s request, Cohan recounts the story of his life.

This post is part of the Politics on Film Blogathon, hosted by the Classic Movie Blog Association.

James Cagney gives the performance of a lifetime as Cohan. Though the role was offered to Fred Astaire (Mr. Astaire said no - he felt he was wrong to portray Cohan; he was right), and finally was given to Mr. Cagney, who was eager to play the part (TCM article). Mr. Cagney had always considered himself a hoofer - his first job in the theatre was dancing in the chorus (Library of Congress biography) - and he was eager to get away from the gangsters to which his career had been relegated. He'd also on occasion been accused of being a communist (his activities in the Screen Actors Guild were part of the issue), and playing Cohan showed him as the ultimate American patriot.

Mr. Cagney was a perfectionist, and demanded long rehearsals to perfect his dancing.  He was coached by Johnny Boyle, a vaudevillian who was highly regarded as an Irish-American tap dancer. At the same time, he was not averse to improvisation - when he first meets Mary Cohan (Joan Leslie), Mr. Cagney improvised most of his "business." The stair dance at the conclusion of the film was also spur of the moment. The dancing style, however was very reminiscent of Cohan's style (you can see some brief clips of Mr. Cohan dancing in this video). His dynamic dancing makes the film - when he is on screen you cannot take your eyes off him.  He's no singer, but as Joan Leslie pointed out "Jim doesn't sing, because he doesn't sing worth a darn. He'd talk it, and every now and again, he'd hit a note...but he had some much energy and such a presence that it doesn't seem like he couldn't sing." (Michael Curtiz: A Life in Film by Alan K. Rode). 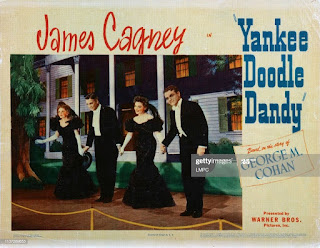 Joan Leslie is a strong counterpart to Mr. Cagney. She gives Mary just the right amount of naivete in the beginning, and slowing moves the character into a knowing and supportive partner. Ms. Leslie had an excellent singing voice, and could dance a bit; she follows Mr. Cagney's lead, as he improvises some of their scenes together, she responds easily.  Ms. Leslie is playing a primarily fictional character.  George M. Cohan was married twice - to Ethel Levey and Agnes Nolan. When he agreed to the film biography, he stipulated that he didn't want either of his wives discussed. Warner Brothers decided to create an amalgam of the two women and give her a different name, thus abiding by Cohan's requirement and still having him be married - as well as provide a motivation for the song "Mary's A Grand Old Name."

Yankee Doodle Dandy is very much a Cagney family affair. James Cagney's brother, William, served as the producer, and sister Jeanne Cagney appears as Josie Cohan. The easy relationship between the brother and sister, combined with the talents of Rosemary DeCamp (Nellie Cohan) and Walter Huston (Jerry Cohan) make for a strong family unit. Ms. DeCamp was actually 11 years younger than Mr. Cagney. Her autobiography comments on the difficulties she and Ms. Cagney had learning the complex dance routines (Tigers in My Lap by Rosemary DeCamp). 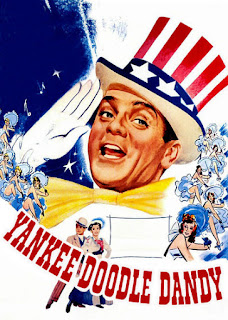 Walter Huston, however, had a theatre background - he'd worked in Vaudeville, and among his fourteen Broadway credits was the musical Knickerbocker Holiday. He has what is perhaps the most moving scene in the film - the death of Jerry Cohan. According to Rudy Behmer (in his commentary on the DVD), Michael Curtiz broke down sobbing as he watched Cagney perform. He ruined at least one take and can be heard in the background of the film if you listen carefully.

The film also features strong performances by Richard Whorf (Sam H. Harris) and Irene Manning (Fay Templeton). George Tobias (Dietz) appears as a would-be theatrical impresario. And S.Z. "Cuddles" Sakall (Schwab) has one scene as the man who stages Cohan and Harris first production. Though the scene is fine, Mr. Cagney was initially upset that Mr. Sakall was mugging through the filming - he asked Mr. Curtiz to tone Sakall down. Much of his work ended up on the cutting room floor. 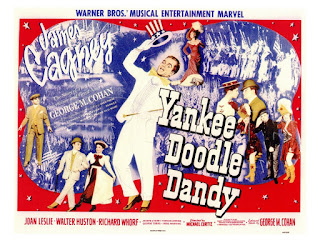 Obviously, a lot of the history is incorrect - the frame story in particular is not anywhere the actual story.  World War II broke out while Yankee Doodle Dandy was being filmed (Ms. DeCamp related the company huddled around a radio on the set, listening to Franklin Roosevelt deliver his address to Congress). I’d Rather Be Right, however,  ran from November 1937 to July 1938. And Roosevelt gave Cohan the Congressional Gold Medal (NOT, as stated in the film, the Congressional Medal of Honor - the Medal of Honor is a military award) in May of 1940.  It had been awarded in June of 1936, but Cohan (a Democrat), disliked unions and though an early Roosevelt supporter was not fond of Roosevelt's pro-union stance. The photo below (from the Library of Congress), shows George M. Cohan receiving the Gold Metal from the President. Mr. Cohan died in November of 1942, a few months after the film was released (AFI Catalog). 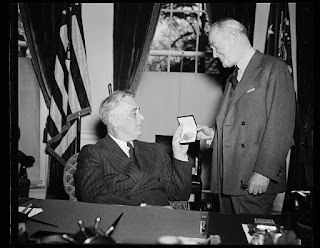 Bosley Crowther's review in the New York Times was glowing: "as warm and delightful a musical picture as has hit the screen in years, a corking good entertainment and as affectionate, if not as accurate, a film biography as has ever—yes, ever—been made." A Roger Ebert review from 1998 was also complimentary.  The film received three Academy Awards (for Actor - Mr. Cagney, Sound Recording, and Scoring of a Musical). It was also nominated for five awards: Picture, Supporting Actor - Walter Huston, Director, Original Screenplay, and Film Editing).  In 1993, it was added to the National Film Registry. It is #18 on AFI's list of musicals, #100 on the original 100 Years, 100 Movies, and #98 on the 10th Anniversary list.

If you'd like to read more about this exceptional picture, take a look at "‘A Great American Service’: George M. Cohan, the Stage, and the Nation in Yankee Doodle Dandy" by  Elizabeth Titrington Craft from The Oxford Handbook of Musical Theatre Screen Adaptations Edited by Dominic McHugh Oxford Handbook Online and this American Heritage article. If you've never seen Yankee Doodle Dandy, treat yourself and get hold of a copy. In the meantime, here is the trailer:


This post is part of the Classic Movie Blog Association Blogathon, Politics on Film. Please visit the website to read some of the other wonderful posts. 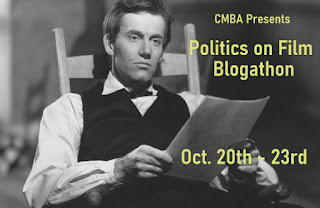