The murder of police officer Ed Monigan bring his colleague Mike Conovan (Van Johnson) to the Scene of the Crime (1949). Though the papers are accusing Monigan of being on the take, Mike does not believe Monigan was murdered because he was taking bribes. The investigation, however, is disturbing Mike's wife, Gloria (Arlene Dahl) - she's terrified her husband will end up like Monigan, and is doing everything in her power to convince Mike that there are other career options than the police force.

This was Van Johnson's first appearance in a noir-ish role, and he's good as the dedicated police officer. Conovan is the main focus of the film - it's all about his relationships with his wife, his fellow officers, the son of his deceased friend, and finally the criminals he has to deal with on a daily basis. If Mr. Johnson doesn't quite give us a tortured man, he does convey the conflicts that are plaguing Mike.

The more interesting character is Lili, played by Gloria DeHaven. We found ourselves comparing her (favorably) to Jane Greer in Out of the Past. Like Kathy, Lili is a character who is not all that she appears to be on the surface. She is seemingly an innocent, tossed by circumstances into a world of danger but as the film progresses, we learn much more about her apparent innocence. Ms. DeHaven does an excellent job in making you believe in the roller coaster that is Lili. 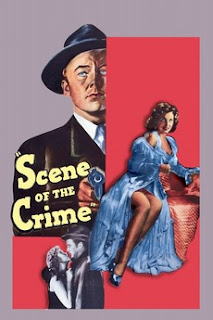 Arlene Dahl has a much less appealing role. Gloria spends most of the film looking upset. She does have some very good scenes (especially one at the film's end), but the focus of the part is to make Conovan doubt his ability to perform his job. Ms. Dahl was not the first choice for Gloria - Donna Reed was originally cast in the part (AFI catalog).  In what could have been a thankless role, Ms. Dahl does make the audience like and sympathize with Gloria, which is important, otherwise Mike's dilemma is pointless.

Given that this is an MGM film (an unusual venture for them to take on a noir (TCM article)), the film is gifted with a number of excellent supporting players. Tom Drake, as the straight arrow cop - nicknamed C.C., is fine as the neophyte studying under Mike. Leon Ames (surprisingly, without a mustache!) is also good in the small part of Captain A. C. Forster, Mike's understanding chief. Donald Woods makes Bob Herkimer into a quite unlikable character -  a reporter who is after the story at all costs, and doesn't let a little thing like friendship get in his way. 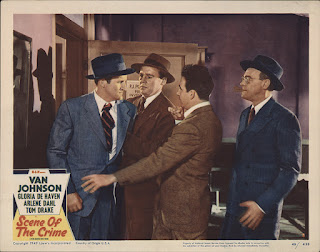 Two actors, however, dominate the supporting ranks. The first is John McIntire (Fred Piper), who is excellent as the veteran who is nearing the end of his career as an officer. He brings a sturdiness to the role that demonstrate why he has been one of Mike's mentors.

The actor who steals the show is Norman Lloyd (Sleeper). A stoolie who works for Mike, Sleeper is extremely creepy. Mr. Lloyd makes no attempts to make Sleeper in any way attractive, yet as repulsive as he is, there is a sort of sick humor that makes you keep watching. A theatre actor, who worked on Broadway, with the Civic Repertory Theatre, with the Federal Theatre Project, and with the Mercury Theatre, he came to film-going public's attention as the title character in Alfred Hitchcock's Saboteur (1941). Throughout the 1940s and early 1950s, he had steady work as a character actor in films such as Spellbound (1945 - also for Mr. Hitchcock), The Green Years (1946), and Limelight (1952). But work disappeared when he was greylisted. Alfred Hitchcock came to the rescue with the offer of work as a director and assistant producer for Alfred Hitchcock Presents, over the objections of studio executives who felt that hiring Mr. Lloyd could be dangerous (The Hollywood Reporter).  He spoke about those years at the TCM Film Festival in 214. Mr. Lloyd really came back to the public's attention as an actor when he was cast as Dr. Daniel Auschlander in the show St. Elsewhere. Mr. Lloyd is retired now - he is 106 at the writing of this post, and speaks regularly with his friend, Ben Mankiewicz. 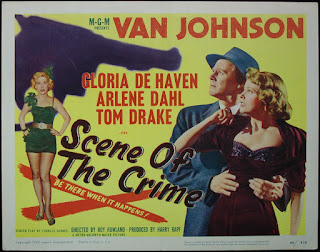 The New York Times review  by Bosley Crowther was lukewarm, though he enjoyed the performances of Mr. Lloyd, Ms. Dahl and Ms. DeHaven. We had one complaint about the film - it really could use a better title - one that actually conveys what the story is about. Other than that, we found this an enjoyable film and one worth seeing.  In the meantime, we'll end with the film's trailer: