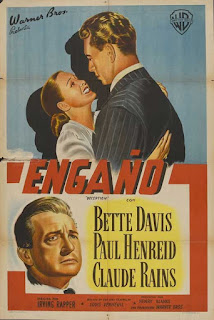 Christine Radcliffe (Bette Davis) races to a concert at a local college. A solo cellist, Karel Novak (Paul Henreid), new to the United States, performs to great acclaim. Before the war, he and Christine were lovers in Germany, but Christine has long believed him to be dead.  Their reunion is joyful, until the jealous Karel demands an explanation for Christine's luxurious life style. The Deception (1946) begins when Christine lies about her life since the war, and her relationship with the brilliant, but ego-maniacal composer Alexander Hollenius (Claude Rains).

Just who is the villain is one of the questions in this film. On the surface, one's instinct is to place Hollenius, a self-absorbed egoist if ever there was one, in that position. But, it's clear from the start that Christine has long ago learned how to deal with Hollenius' moods and demands, so why is she so spooked by him? The answer may be that Karel's jealousy is deranged. He almost strangles Christine when they meet again. His mania and her fears start the string of lies that lead to Christine's downfall.  What certainly is clear is that Christine has lousy taste in men. 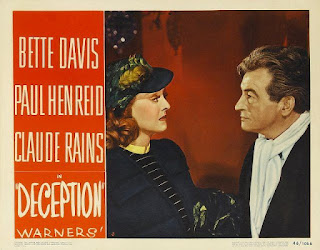 Beyond a doubt, this is Claude Rains movie. As domineering as Hollenius is, it's hard to actually dislike him. He glories in his power and in his talent. He enjoys his life, and while he isn't actually mean, he doesn't appreciate anything that thwarts what he wants. The problem for Christine is that Karel thwarts Hollenius, and while she is immune to his head games, the troubled Karel is not. To see Mr. Rains at his absolute best, watch him manipulate Christine and Karel when they dine out. It is a masterwork of acting (TCM article).  In his commentary on the DVD, Foster Hirsch mentioned that some people claimed Mr. Rains stole the scene from Bette Davis - clearly (as Mr. Hirsch pointed out) no one steals a scene from Ms. Davis. If you watch her during the scene, she's reveling in Mr. Rains performance.

Paul Henreid has the unenviable job of playing a man who is just short of being insane. His fits of anger are positively scary; he's worse then Hollenius in many respects because he has no clue that his self-absorption is so complete.  Mr. Henried does a good job playing an abusive individual and does make you feel that some of his behavior stems from his experiences during the war (though not all of it). 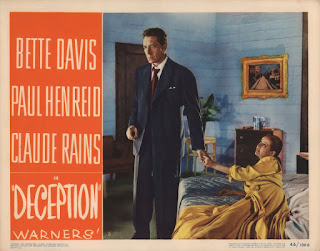 While Bette Davis could play the piano (and practiced hard to do the one scene in which she played), Jack Warner asked her to not worry about it - they would get a pro to do the actual music (but you can tell by her hands that she knows what she is doing).  Paul Henried, however, did not know how to play the cello, and had to have two actual cellists use their arms to make it appear that he was actually playing.

This was the first Warner Brothers film in which Ms. Davis appeared that did not make money (partly due to the production running overtime, due to Ms. Davis' illness). She would only make three more films for Warners. 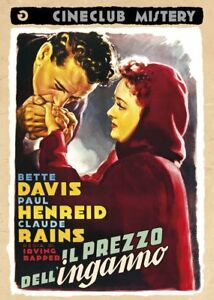 Based on the play Obsession, which was on Broadway in revival when the film opened, the original was a two-character presentation - just Karel and Christine. It was at one point intended as a vehicle for Barbara Stanwyck and Paul Henreid (AFI Catalog).

The New York Times review by Bosley Crowther was not particularly complimentary - but Mr. Crowther didn't like the play much either.  He was, however, very taken with Claude Rains who "fills out a fascinating portrait of a titanic egoist".

This is not Ms. Davis' best film, but it is a tour de force for Mr. Rains, and as such worth your time.  We'll leave you with the trailer: