When their bomber crashes in Nazi Germany, a group of Allied airmen make a Desperate Journey (1942) to get out of the country with information that may help the war effort.

Let's begin by admitting that this is very much a wartime propaganda film.  According to this movie, five Allied officers can take down the entire Nazi war machine and defeat it without breaking into much of a sweat.  Regardless, it's an interesting adventure, with snappy (albeit somewhat jingoistic) dialog and a good rapport among the lead and supporting actors.

Errol Flynn gets top billing as Flight Lt Terrence Forbes, an Australian working with the Allied command in Europe.  This is one of the few times in which Flynn gets to play someone from his native land, and he's quite good as the cocky, but competent Forbes. Errol Flynn was examined by the draft board, but physicians discovered that he had tuberculosis.  Knowing that he would be unable to work (and would not be entitled to any money during his recuperation), Mr. Flynn declined to let the studio know of his illness, nor accept any of the treatments available to him (TCM article). As a result, he lost  a tremendous amount of weight (forcing wardrobe adjustments). Frequently late for work, he was difficult to work with during the shoot. 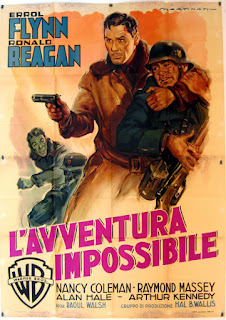 Ronald Reagan (Flying Officer Johnny Hammond) was just off his rousing success in King's Row (1942), and gets second billing above the title with Errol Flynn.  He's good as the devil-may-care American, and got to be the hero of the piece, knocking out Major Otto Baumeister (Raymond Massey), albeit off-camera.  Errol Flynn wanted to the the one to do that particular deed, but he was told no.  Mr. Reagan was called up for military service while shooting the picture - they allowed him a week to finish up the production.  His three years of service did not help his career; he was never able to regain the momentum following King's Row. However, he eventually had other career goals.

The role of Kaethe Brahms was originally intended for Kaaren Verne, but she was replaced by Nancy Coleman (AFI Catalog). It's not a big part, but Ms. Coleman does her best to make Kaethe heroic and appealing.  If there is one fault in the film, it is the scene where the escaping flyers share a meal with Kaethe's parents. Relaxing for the first time in awhile, the men talk liberally - something no soldier would do in these circumstances. 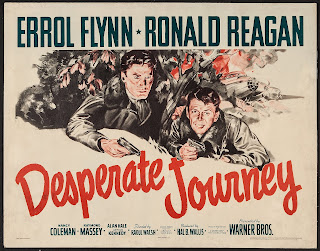 Raymond Massey has the most thankless part. Major Otto Baumeister is downright stupid, and his Nazi soldiers resemble nothing more than the Keystone Kops.  Massey is a good actor, but you wouldn't know it here.  He's really given nothing with which to work.

We have a number of other good actors in the film - Alan Hale as Flight Sergeant Kirk Edwards gets to do some of the comic relief. Arthur Kennedy (Flying Officer Jed Forrest) is the conscience of the group - trying to keep them on task towards getting home with the information they've obtained.  This would be Ronald Sinclair (Flight Sergeant Lloyd Hollis) last acting role (he'd been a child actor) -  he became a film editor, working with Roger Corman. 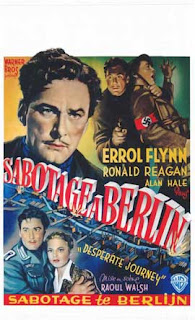 Bosley Crowther, in his The New York Times review, was unimpressed with the movie - "an invasion of Nazi Germany which would put the Commandos to shame." It was nominated for an Oscar for Special Effects (it lost to Reap the Wild Wind). While this is not the best movie ever made, it's fun, with an enjoyable cast.  We'll leave you with this trailer: