Jean is No Angel

Ambulance driver Frank Jessup (Robert Mitchum) is wooed by Diane Tremayne (Jean Simmons) after he responds to an emergency call involving Diane's stepmother Catherine (Barbara O'Neil). Diane convinces him to accept a job with her family as a chauffeur, ostensibly to help Frank earn enough money to open a garage. However, Diane has other plans for Frank.  Our film this week is Angel Face (1953).

One of the great attractions of this film is the presence of three really strong women.  Mona Freeman, who finally gets to play a character with gumption; Jean Simmons playing the determined murderess; and Barbara O'Neill as the bane of Ms. Simmons existence.  These are all performances worthy of these excellent actresses.

Jean Simmons stars as the malevolent Diane, who hungers to again be alone with her father.  In the way is her wealthy stepmother, Catherine.  When Diane meets Frank Jessup, she sees him as a possible accomplice in the removal of her stepmother from Earth. Ms. Simmons is excellent in the role that she really didn't want. She was under contract to Howard Hughes, who was furious at Ms. Simmons for cutting her hair, and with 18 days left on her contract, forced her into this film. Mr. Hughes told director Otto Preminger to make the set as uncomfortable for Ms. Simmons as he could, so Mr. Preminger felt quite comfortable slapping Ms. Simmons one day when he was annoyed with her.  He came to regret his actions - Robert Mitchum punched him back in retribution (TCM article). 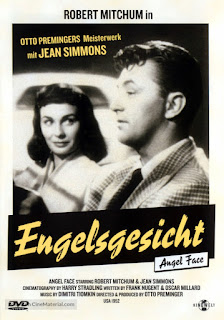 Once Diane sees Frank, she is determined to lock him in.  That means getting him away from his long-time girlfriend, Mary Wilton (Mona Freeman). Frank is quick to cheat on Mary - we wondered how many times he had done this before. While Mary is willing to give him the benefit of the doubt in the beginning, a meeting with Diane makes Mary question her feelings for Frank.  Ms. Freeman plays the character with resolve.  She's no meek mouse allowing a man to get away with anything.  She wants her man to love her, not every female in the vicinity.

Catherine Tremayne, on the other hand, is satisfied with being second in her husband's life. She's aware that her writer-husband (who's been unable to produce a book for years) married her for her money. But he has affection for her, She is generous to him, and to Diane, but Diane is obsessed with her father, and sees Catherine as a barrier to her relationship with her father. Barbara O'Neil paints a portrait of a warm woman who is being maligned by her ungrateful stepdaughter. 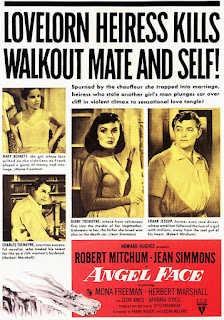 Which brings us to the male members of the cast.  Robert Mitchum does a good job playing a not very strong man - Diane especially leads him around by the nose.  Shortly after we meet Frank, he's lying to his long-time girlfriend - and we don't trust him. Frank is a fairly unambitious man. He's interested in Diane, but it's a lazy kind of interest.

Herbert Marshall (Charles Tremayne) is a good companion to Frank - he too is subservient to the women in his life - both Diane and Catherine.  Charles is weak and has lost any drive he might have had. One can see Frank becoming the same person in later years. 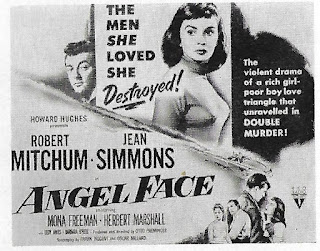 The story was loosely based on the case of real-life case of Beulah Louise Overell and George Gollum who were accused of killing her parents (AFI Catalog).  The New York Times review by Howard Thompson (H.H.T.) was unenthusiastic, but this is an excellent, dark movie, with references to Out of the Past, Double Indemnity, and The Postman Always Rings Twice, without being a copy of any of them.  For more detailed information on the film, I invite you to view Eddie Muller's Noir Alley intro and outro to the film's airing.  Here's a trailer to give you a peek at the picture.