Barbara is on Her Own 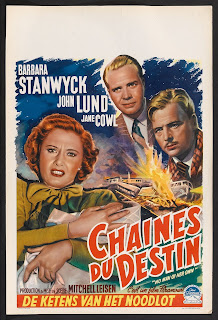 Patrice Harkess (Barbara Stanwyck) sits holding her baby, Bill Harkess (John Lund) nearby. They are waiting for something, and Patrice believes that, when it comes, Bill will leave her.  The phone rings - it's the police, and they are on their way over.  Our film tonight is No Man of Her Own (1950), part of the Hidden Classics Blogathon, hosted by the Classic Movie Blog Association.

This has long been one of my personal favorite Barbara Stanwyck films, and it was one she was eager to do (Barbara Stanwyck: The Miracle Woman by Dan Callahan).  She is perfection as a woman thrown into a morass, and comes back to look it square in the eye. For Patrice Harkness is a name forced on unwed mother Helen Ferguson. Abandoned by her lover, Stephen Morley (Lyle Bettger), with only a train ticket to New York to her name, she finds herself on the train, unable to find a seat, and with no money for food. She's "adopted" by Patrice (Phyllis Thaxter) and Hugh Harkness (Richard Denning), a young couple pregnant with their first child, en route to meet his family for the first time. In less capable hands, it would be hard to understand just why the Harknesses take on this needy young woman, but Ms. Stanwyck makes you understand from the start the inner goodness of Helen Ferguson, who only wants to be able to make a decent life for her and for her coming child. That Helen was originally to be a prostitute (AFI catalog) seems outlandish having seen the film.  The audience must care for her, and Ms. Stanwyck wraps her audience around her lovely finger. She also has the inner determination to handle the problem that is Stephen Morley (TCM article). 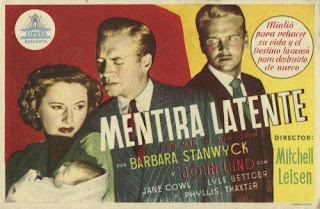 While it is true that John Lund is not an actor in Ms. Stanwyck's league (then again, who is?), he does a good job in keeping their relationship on an even keel.  A particularly telling scene is one in which his father (Henry O'Neill) adjusts his will.  The audience is starting to realize that Bill is suspicious of Patrice; but when she reacts with horror at the news about the will, Bill's reaction sets us up for the rest of their relationship - it doesn't matter to him any longer who she is. He knows the kind of person she is and that is all the information he requires.

Jane Cowl (Mrs. Harkness) is superb as the loving mother who looks to Patrice and her baby as the final link to her deceased son. She's warm, friendly, and protective. But she is also smart; she knows very quickly that Patrice is in some kind of trouble and she begins immediately to find a way to safeguard her family - including Patrice - from any danger. Ms. Cowl only made a total of seven pictures (in Stage Door Canteen, she played herself). However, between 1903 and 1947, she was in 33 Broadway plays, many of which she wrote and/or directed, including Smilin' Through (which was made into a film with Norma Shearer). She died in 1950, at the age of 65. 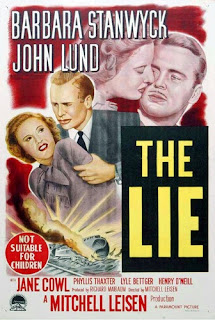 Lyle Bettger  (Stephen Morley) is deliciously evil as a horrible man who keeps the audience on tenderhooks. We never really believe him, but at the same time, it's hard to think that anyone could be as bad as he is.  In his first scene, we watch him ENJOY Helen's heartbreak.  This is his lover, pregnant with his child, but he's done with her. He's like a peacock preening at her misery, which of course he sees as her need for HIM.  A little hint of the future is given when we meet his new inamorata, Irma (Carole Matthews) who is disgusted at his treatment of Helen.
Using Phyllis Thaxter (Patrice Harkness) and Richard Denning (Hugh Harkness) as the young married couple is an interesting conceit. Both are well enough known to the audiences that one is  lulled into thinking they will be with you for the whole movie. Sadly, that is not to be, but both are lovely in their brief scenes with Ms. Stanwyck.  Their warmth echos what Helen will find when she inadvertently adopts Patrice's identity. 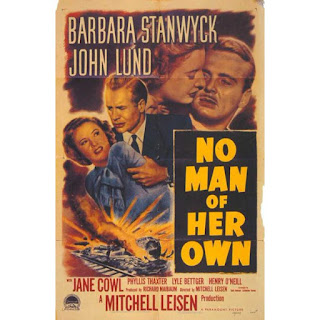 The film was based on a story by Cornell Woolrich, I Married a Dead Man (Senses of Cinema). The New York Times review by Bosley Crowther is unimpressive, but in a 2012 New York Times commentary upon the DVD release, Dave Kehr discusses the intricacies of director Mitchell Leisen's work.

The Screen Director's Playhouse aired a version on television in September 1951 with Ms. Stanwyck in the lead. The film was remade in 1996 as Mrs. Winterbourne  with Ricki Lake in the title role. Nothing, however, can beat Ms. Stanwyck, and we heartily recommend this wonderful film. We'll leave you with a trailer

Before you go, I suggest you visit the Classic Movie Blog Association page for this blogathon, and look at some of the other films being discussed for this celebration. 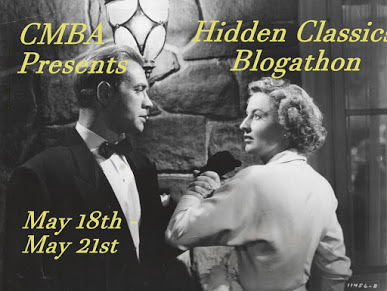