Sidney Goes to the Park 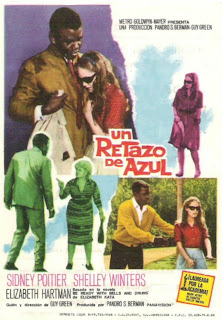 Blinded in an accident as a small child, Selina D'Arcey (Elizabeth Hartman), lives with her prostitute mother, Rose-Ann (Shelley Winters) and her alcoholic grandfather, Old Pa (Wallace Ford) in a small apartment. She keeps the home clean and to bring in some money, strings beads for Mr. Faber (John Qualen) who visits a few times a week.  But Selina yearns to get out of the apartment; when Mr. Faber offers to bring her to the park one day, a new world opens for Selina, especially after she meets Gordon Ralfe (Sidney Poitier). The week, we discussed A Patch of Blue (1965).

On some levels, it is sad that this movie still resonates so clearly with us, since it is so much about racism. When you see the way Rose-Ann lives, as compared to Gordon and his brother Mark (Ivan Dixon), and then hear her refer to Black people as trash, it's all you can do to not scream.  Rose-Ann D'Arcey is probably one of the ugliest characters in any film. She makes trash look good, quite frankly. But as we learn from her, and from Gordon's conversations with his brother, race is ever-present barrier to this story of love and friendship. 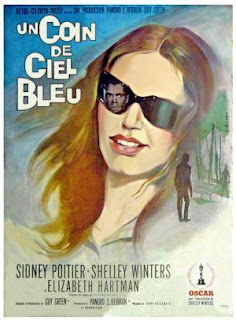 To say that Sidney Poitier is magnificent in the part is an understatement.  His characterization of Gordon walks a very thin line - we can see his growing love for Selina, but it is mixed with pity, anger, and regret. Does he love Selina romantically? It's hard to tell, because Mr. Poitier tries very hard to subdue any romantic feelings for this lost lamb.  Of course, the race issue is key, but there is more to it - he knows that this is a girl who has no concept of life and love. Her feelings may be gratitude; his may be pity.  The romance needs time to see if it is durable and Gordon is careful to keep the barriers firmly in place.Likewise Elizabeth Hartman makes Selina both naive and worldly at the same time. Her vision taken from her when her mother tried to throw acid into her husband's face, but hit 5-year old Selina instead. She's been kept at home as a servant, taught nothing, raped as a teen-ager by one of her mother's clients, and been beaten and verbally abused by her mother. Ms. Hartman wore specially designed contact lenses to obscure her vision (AFI catalog); she invests the character with an intelligence that is admirable. We know that she has taught herself to maneuver within her small world. As it expands, so too does her ability to broaden her own confines. 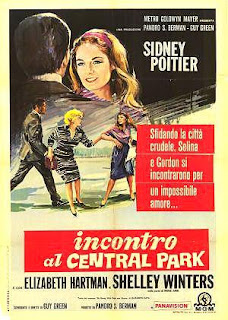 Shelley Winters won her second Oscar (Best Supporting Actress) for her work in this film.  She said that she always tried to find "something to like in the characters I've played, but not this time...I really hate this woman" (TCM article). Ms. Winters pulls no punches in her portrayal of this despicable woman. She's willing to put herself out there and make Rose-Ann the monster she needs to be in order to display the utter ludicrousness of this woman's bigotry.  It was a well-deserved award for a performance that digs into the depths of cruelty to create a masterful performance. One does wonder how Rose-Ann managed to convince social services to allow her to keep her child!

The film is blessed with other fine performances.  John Qualen's Mr. Faber is a gentle soul. His affection for Selina ("my best worker") is sincere.  With his small gesture - taking her into the park a few times a week (where she can work in the fresh air) - he opens the door for her transformation. The character's goodness becomes even more apparent the further we get into the film, but Mr. Qualen's touch is one of kindness. 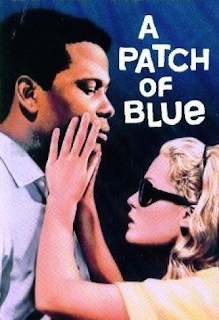 It's always a pleasure to see Ivan Dixon in any role, and he is excellent as Gordon's brother. A hospital intern who has had to struggle to get into his chosen profession, he worries that Gordon is over his head in taking on the responsibility for a poor, white, blind girl. Mr. Dixon got his acting start on Broadway, in The Cave Dwellers; later, he would appear in A Raisin in the Sun, a part he would recreate for the film version. He would continue to act in films and on television (notably as a regular in Hogan's Heroes for five years). He also became a director, primarily in series television. He died in 2008 of kidney failure - his alma mater North Carolina Central University has named their theatrical troupe The Ivan Dixon Players. 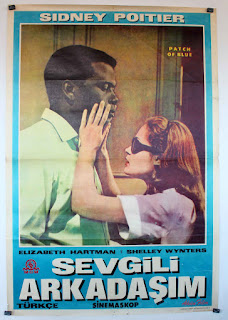 Elisabeth Fraser (Sadie) plays Rose-Ann's literal partner in crime. She's almost as bad as Rose-Ann. It's a small, but important role as Sadie sets in motion the final act, in which Selina's future hangs by a thread.

Wallace Ford had a long and impressive career. He started on Vaudeville; by 1921, he was appearing on Broadway (he did 11 productions between 1921 and 1939). He started in films in 1929; in 1931 he co-starred with Clark Gable and Joan Crawford in Possessed. He worked steadily in both films and television, frequently as the star, until A Patch of Blue.  This was his final film appearance, and he is marvelous. A drunk, Ole Pa has wasted his life, but he genuinely cares for his grandchild and it is that which radiates through his performance. 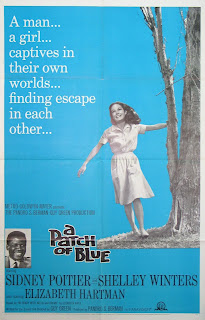 The film was based on Elizabeth Kata’s 1961 novel, Be Ready With Bells and Drums (though the book's very downbeat ending was changed).  The film was nominated for 5 Academy Awards (including Actress, Black & White Cinematography, Black and White Art-Set Direction, and Music).

One of the things we enjoyed about the film is that it is a story that you can discuss past the action of the film - what DID happen to Selina and Gordon after we leave them? We'll leave you to ponder that question, as well as a trailer: