Michael Lambert (Glenn Ford) is a down-on-his-luck mining engineer. He agreed to drive a truck to get to a place where he can find a job, but is arrested for running the truck into another car. He’s bailed out by Paula Craig (Janis Carter), but doesn’t know why.  He is also doesn’t know he is about to be Framed (1947).

In the spirit of honesty, I'll start by mentioning that I'm not a fan of Glenn Ford.  He's done some good work (Gilda, primarily), but by and large I find him a one-dimensional actor, who does self-pity or anger, and not much more.  And I didn't find more than that in this film. In the final analysis, two members of our group liked the movie, and two didn't  The two that enjoyed it liked the story, though they said it could have been tighter.

We know that Michael Lambert has managed to get to his destination to find a job as a mining engineer, but we know precious little more about him, except that he is an alcoholic. While the story doesn't tell us why he drinks so much, it works as a plot point - it makes it easier to set him up as a victim. 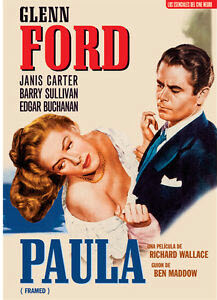 We were also not impressed with Janis Carter. From her first second on film, we know that Paula is up to no good; it's apparent that Michael knows it too.  Yet, he still keeps hanging around her.  This is no The Postman Always Rings Twice, because there is no chemistry or connection between the characters.  It seems clear that they are not enamored of one another, nor are they trusting of one another.  Ms. Carter was cast in hopes of creating a new Gilda for Mr. Ford (TCM article). Sadly, it didn't work

Barry Sullivan (Stephen Price), however is good as the dishonest banker who's clearly using Paula to his own ends.  That there doesn't really seem to be much between them works in the movie's favor  - their relationship is a business deal, pure and simple, and Mr. Sullivan's distancing works for the film. 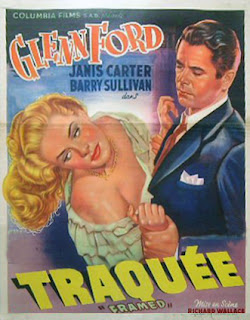 Two minor characters are worth noting. Edgar Buchanan (Jeff Cunningham) plays a prospector who hires Michael as his mining engineer. It's the one clue we have that Michael is good at his job, because Jeff is a smart man, not the ditzy movie prospector we generally expect to see.  Karen Morley (Mrs. Price) has a nice scene as Barry Sullivan's neglected wife.  She does a lot with the character in very little screen time, and we were sorry not to see more of her. 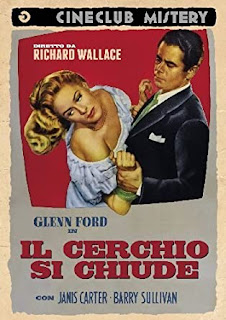 The original title for the movie was They Walk Alone (AFI Catalog).  The New York Times review by A. H. Weiler (A.W.) was positive. It's got a decent story, and if you can overlook some of the casting issues, it's an interesting enough film to watch.  We'll leave you with a scene featuring our three leads: