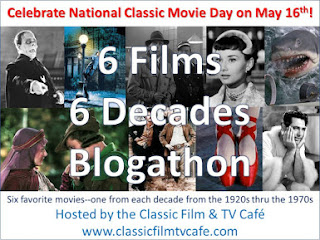 Welcome to our celebration of National Classic Movie Day for May 16, 2021. As part of a blogathon hosted by the Classic Film and TV Cafe, we're going to discuss six films - one from each decade beginning in 1920.  We hope you've seen these films.  If not, perhaps you'll consider giving them a viewing.  All are worth your time. 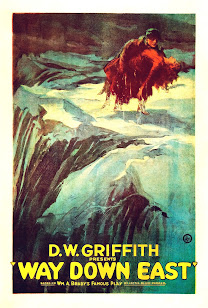 We'll start our discussion right at the beginning of our first decade with Way Down East (1920). Lillian Gish stars as Anna, an unwed mother who is thrown out of her home after becoming pregnant.  Following the death of her infant, she finds work as a servant girl and falls in love with David Bartlett (Richard Barthelmess), the son of her employer.  But gossip reaches the Bartlett farm about her past, causing her to flee out into the storm. What follows is a spectacular scene in which Ms. Gish gets trapped on an ice floe, while Mr. Barthelmess attempts to save her. The scene was actually filmed in the midst of a blizzard and Ms. Gish suffered hand pain for the rest of her life (TCM article).  You can see that scene below.  In the meantime, you get to see some fine acting and an engaging script.  It's a powerful film, primarily because of Ms. Gish's abilities. If you've never seen her in a silent film, this may be the one with which to start. 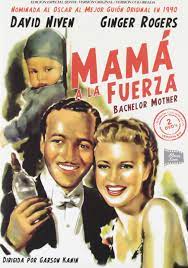 We'll go to the end of the 1930's for our next film. The Christmas rush over, Polly Parrish (Ginger Rogers) uses her lunch hour to begin job hunting; by Christmas Eve, she'll be unemployed again. She sees a woman abandoning a baby on the steps of an orphanage, and rushes over to make sure the baby doesn't fall - and is mistaken by the orphanage personnel for the mother.  Bachelor Mother (1939) changes Polly's world as she becomes tthe mother of a strange child, and is wooed by the scion of the department store for which she works. Ginger Rogers is delightful as the reluctant unwed mother.

The beauty of this remarkable film is the way in which all around her treat Polly after discovering she has a child.  David Merlin (David Niven) wants to give her a permanent job; Polly's landlady, Mrs. Weiss (Ferike Boros) volunteers to take on baby-sitting duty, and David's father John Merlin (Charles Coburn) decides the baby is his grandchild. The film circumvents the code by showing sympathy to a mother on her own, by making that mother an adoptive one.  It's a remarkable and genuinely sweet film, and definitely worth viewing.  The trailer will give you a good idea of this lovely movie: 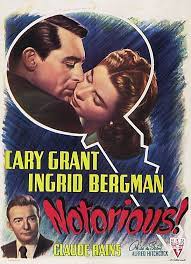 The 1940s was an especially difficult decade to nail down just one film, so I opted to go to the directing master Alfred Hitchcock, and discuss Notorious (1946), which for me is one of his often ignored masterpieces. Alicia Huberman (Ingrid Bergman), the daughter of a convicted German spy, is recruited by T. R. Devlin (Cary Grant) to spy on another suspected spy, Alexander Sebastian (Claude Rains). Part of the beauty of this film is that Alicia is no innocent - she's been running with a fast crowd since her father's conviction, and knows exactly what comes with her mission, consenting to wed Sebastian to get the needed information.

The combination of Grant and Bergman is intoxicating. Their's is not so much a love story as a lust story that grows despite the reluctance of the leading man. Mr. Grant makes Devlin a dark and angry man, who finds himself loving a woman he thinks is unworthy of him, only to find that she is a far better person than he. Claude Rains turns the tables on the viewer by making the audience actually sympathize with him, despite the fact that he is a Nazi spy and murderer. It's a world turned upside down, and the viewer is given a wild ride to a tense ending. The trailer will give you a look at this absorbing tale. 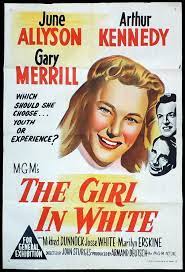 The role of women had changed as the 1940s ended, and the 1950s began.  Women who had left the home to work were now been forced back into the home.  In response, Emily Dunning Barringer, a physician in New York, wrote an autobiography about her years as an ambulance surgeon in 1902 (she was the first woman to hold this position). The film that was made of her book is The Girl in White (1952). It's possibly the only biography of a female physician, and gives a clear picture of the kinds of abuse that women who were entering the field had to face.

June Allyson brings both innocence and strength to the young woman who is bucking the system.  Arthur Kennedy is good as her suitor, who originally wants her to give up her career and become the supportive wife and mother. Without going into detail, the ending of the film is an eye-opener, and not the traditional Hollywood fare.  If you've never seen this before, I strongly recommend it. This trailer will serve as an introduction. 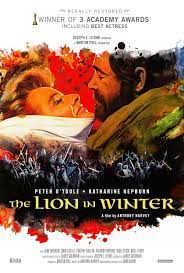 I had to think long and hard in selecting a representative film of the 1960s.  In keeping with my theme of strong women, I selected The Lion in Winter (1968). Katharine Hepburn is dynamic as the power-seeking Eleanor of Aquitaine; she won her third Oscar (tying with Barbra Streisand - the only time thus far the Actress category has resulted in a tie).

The interplay between Ms. Hepburn and Peter O'Toole is dynamic. Sure, the dialog is not period but they film crackles with superb lines. My favorite has got to be Ms. Hepburn musing on her marriage annulment from Louis VII of France: "Good, good Louis. If I'd managed sons for him instead of all those little girls, I'd still be stuck with being Queen of France and we should not have known each other. Such my angels is the role of sex in history." You can see that scene in this discussion of Ms. Hepburn's career by Anthony Hopkins

Peter O'Toole had a discussion about Ms. Hepburn with Robert Osborne which is available here.  He had approval rights for the film, and he wanted Ms. Hepburn. While there was a remake of the story in 2003, with Patrick Stewart and Glenn Close - both marvelous actors and favorites of mine - nothing can top the electricity between all the actors in the 1968 film.

If you've not seen it - please get hold of a copy. I hope this trailer will serve as an encouragement. 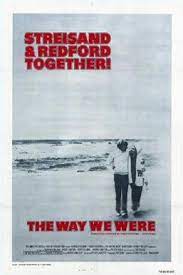 As the 1960s gave rise to more violent films, I admit to not seeing many of the "greats" of the 1970s, so making a selection took some thought.  I decided on The Way We Were (1973). Again, a strong woman attempts to take on the world - or at least her part of it.

Katie Morosky (Barbra Streisand) is a college radical who falls in love - initially over her better judgement - with jock Hubbell Gardiner (Robert Redford).  When they meet again during World War II, their love for each other flames and they decide to marry.  But Hubbell's career takes them to Hollywood, where Katie's radical past becomes a threat to their future.

If there is one thing I regret about this film, it is the fact that a decision was made to cut a scene that explained the real reason for Hubbell and Katie's eventual divorce. You can see that scene and a few others in this excerpt from a documentary about the film. In my humble opinion, the inclusion of the one scene would have made an already great picture perfect.

I had my own personal connection to the movie - they filmed the scenes outside Katie's apartment a few blocks from where I lived in New York, and I got there just in time to see the trucks leave. Sigh.  But it was exciting to see the finished scenes in the film. You can actually see that location in this trailer from the film.

In conclusion, Happy National Classic Movie Day.  Please be sure to visit the other blogs that are posting for the day, and find out about some additional great films.